The magnificent St Lawrence Hall is located at 157 King St E (at Jarvis St on the southwest corner), in the Old Town, St Lawrence neighbourhood of Toronto.

Early on an April morning in 1849, the first of Toronto’s great fires broke out. The blaze started at the back of the tavern which was located on King St E, near Nelson St (present-day Jarvis St). Flames spread quickly through the area bounded by King E, Church, Adelaide E and George Sts, in what was known then as the centre of downtown Toronto. Also called the “Cathedral Fire”, The Cathedral Church of St James, City Hall, the Toronto Mirror (newspaper) along with many businesses and wooden structures were destroyed.

The Architecture of St Lawrence Hall

Built on the ruins of the first City Hall, the stately St Lawrence Hall was constructed in 1850. It cost £5,455 to build. Designed by architect William Thomas in the Renaissance Revival style, the 3-storey, T-shaped building is in clad stone.

The centre block features a trio of arched openings that include the main entryway. Over the arches are keystones with the sculpted faces of the river gods which represent the St Lawrence River, the Niagara River and Lake Ontario. Other elements of the heritage building include a tetrastyle portico with Corinthian columns and a sculptured tympanum pediment. The mansard roof has semi-circular dormers and is clad with slate. The Hall is crowned with a domed cupola that has a bell, four clock faces and a flag pole.

On either side of the centre block are two wings that had shops on the main floor with public rooms and offices on the upper floors. On the third floor is an incredible Great Hall featuring dado, cornice mouldings, a grand chandelier and a bold ceiling with decorative plasterwork. The hall has hosted many performances, social events and lectures. Some of those included Toronto’s first mayor William Lyon Mackenzie as well as American showman P.T. Barnum. Several Abolition meetings were held during the years that Canada was receiving those seeking refuge through the Underground Railroad.

In 1851, the third St Lawrence Market North on the northwest corner of Front St E and Jarvis St was completed. At that time, visitors could enter through the main doors of St Lawrence Hall on King St E and walk to the rear of the building to a shopping arcade of the then-connected market.

By the mid-1960’s, the building fell into disrepair and was being threatened with demolition. Thanks to the efforts of architect Eric Arthur, this piece of Toronto’s history was saved and restored to its original glory. It was also part of the City’s commemoration of the Canadian Centennial in 1967. That same year, it became a National Historic Site of Canada. 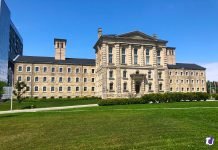 St Lawrence Market South – One of the World’s Greatest Markets