The Scadding House is located at 6 Trinity Sq (beside the Eaton Centre, on the west side, at the centre entrance) in downtown Toronto. The heritage home is tucked away next to one of Canada’s largest and busiest shopping complexes. It was once home to Reverend Henry Scadding.

Born in Devonshire, England in 1813, he came to Canada with his family at the age of 8. He attended the Home District Grammar School and was the first student enrolled at Upper Canada College. In 1833, Henry Scadding travelled to England to attend Cambridge University, returning to Canada four years later.

In 1838, he became an ordained Anglican priest at St James Church. In 1847, Rev. Scadding became the first rector at the newly built, The Church of the Holy Trinity – a position he held until 1875.

Also known as Dr Scadding, the townhouse he lived in was built in 1862. It was designed by William Hay and is a fine example of Toronto’s early residential architecture. The yellow-brick house, which complements the church, is four-storeys plus an attic. The first floor is partially underground. On the south side of the top floor is a small balcony with decorative woodwork. There are also gable windows and a chimney in the centre of the house. While the pre-Confederation home once had a mansard roof, it now has a hip roof.

Along with being a reverend and scholar, Henry Scadding was also one of Toronto’s first and most important historians. He wrote Toronto of Old (1873) which was the first book of significance about the history of Toronto. With JC Dent, he also wrote Toronto: Past and Present (1884).

Reverend Dr Henry Scadding passed away in 1901. It’s thought that his tranquil and kind presence remains in the home.

In 1974, when the Eaton Centre was being constructed, the Inner City Angels saved the Scadding House from demolition. They sponsored $350,000 not only for its restoration, but also a 150 ft move to the southwest.

The historically significant house received heritage status in 1973. It’s sandwiched between a space to the east of The Church of the Holy Trinity and to the west of the Eaton Centre. From Bay St, take the walkway east between Marriott Downtown and Bell Trinity Square Building and head to the area behind the church. Or, from Queen St W, walk north on James St. It can also be reached through the west entrance of the Eaton Centre.

The basement under 6 Trinity Sq can be rented from the church for meetings, classes, workshops and more for up to 25 guests. 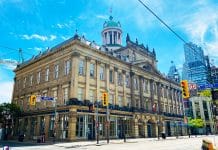 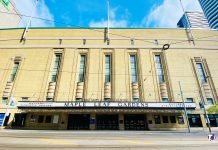