The Scadding Cabin is located at the southwest end of Exhibition Place in Toronto. The cabin is in an area known as the “Historic Mile” near Fort Rouillé, the Stanley Barracks and Fort York.

In 1792, John Scadding left his home of Devonshire, England to assist his close friend, Lieutenant Governor John Graves Simcoe with the newly created Province of Upper Canada (present-day Ontario). Arriving in what we know today as Niagara-on-the-Lake, establishments were set up there and in York (present-day Toronto).

In 1793, the Crown granted John Scadding, who served as Clerk/Secretary to Lieutenant Governor Simcoe, a 253-acre piece of land in York. Designated as Lot 15, it was bounded by Lake Ontario to the south, the Don River to the west, Danforth Ave to the north and Broadview Ave to the east. The piece of land featured not only densely wooded steep hills of mainly white pine but also marshes. Although the land was rugged, it was also picturesque with views of the lake and the then-winding Don River. Rich with wildlife, the waters had rock-bass, perch and pike while the land had grouse, quail, fox, muskrats, mink, snakes, turtles and more.

In 1794 and as part of his settlement obligations, Scadding constructed a log cabin and a large barn on the property. The Scadding Cabin originally stood on the east side of the Don River and on the south side of present-day Queen St E. It’s made of rough-cut pine timbers with dove-tailed corners. It also has wooden shingles and a stone fireplace. That log cabin is Toronto’s oldest known surviving structure.

Due to troubling times, the ailing Lieutenant Governor and the threat of war, Scadding returned to England with Simcoe in 1796. Scadding didn’t finish his plan of creating a homestead for his future family and cultivating the land. During his time back in England, John married Melicent Triggs. They had three sons – John, Charles and Henry Scadding.

In 1818, John returned to Canada without his family to make improvements to Lot 15. He sold the 1794-built log cabin and and a few acres of property around the structure to a farmer named John Smith. With the proceeds, Scadding built a larger home north of the original cabin but still on Lot 15. It was located on the east side of the Don River, just north of Gerrard St E. When he brought his family to Canada between 1819 to 1821, that’s the home they lived in. Since demolished, it was on the site of the Old Don Jail.

The Scadding’s worked to tame the land which was then considered to be far remote from town. On the homestead, there were fields of grain including wheat, barley and oats as well as orchards with fruit trees and rows of corn. The flatlands were transformed into meadows for sheep and other grazing animals.

In 1824, while workers were felling trees on the property, a nearly cut-through tree struck John Scadding. He succumbed to his injuries shortly after. Scadding was known as one who could “walk with kings nor lose the common touch”.

Sale of the Northern Portion of Lot 15

In 1856, the northern portion of the Scadding Farm was sold to the City of Toronto. Then just beyond the City limits, the 119 acres of property was purchased to both secure a site for the House of Refuge, a hospice for the “poor, needy and disabled” as well as a new prison, what we know today as the Old Don Jail. Prisoners of the jail worked an Industrial Farm on the property which was originally cultivated by the Scadding family. The site today is also home to Riverdale Park East.

In 1869, the York Pioneer and Historical Society was founded at the Mechanics’ Institute, once at the northeast corner of Church and Adelaide Sts. Its purpose was “to keep alive reminiscences of a primitive day and of making collections of them before they became lost”. Founding member and president of the Society was Dr Henry Scadding. During a meeting in 1879, society member John Smith (son of farmer William Smith), offered to donate the old Scadding Cabin to the York Pioneers as it was an “interesting relic of the past”.

That same year, the York Pioneers dismantled the cabin and with a cart and oxen, hauled the cabin pieces to Exhibition grounds where they reconstructed it. Then known as the Simcoe Cabin, it was a part of the celebrations of the first CNE which at the time was called the Toronto Industrial Exhibition. Since then, the cabin/museum has been owned and maintained by the York Pioneer and Historical Society.

The historic cabin was renamed Scadding Cabin to honour Dr Henry Scadding for his service to the York Pioneers and for being one of Toronto’s early historians.

In the late 1950’s, the building was raised and placed on a foundation. The City gave this first-generation Toronto building heritage status in 1989.

The Scadding Cabin is outfitted with pioneer furnishings used by early settlers of York from the 1830’s to the early 1840’s. Artifacts include a Windsor chair, spinning wheels, a candle mold, bread and butter making equipment, wool winder and utensils for cooking on an open hearth. More information on this piece of Toronto’s history can be found at York Pioneer and Historical Society. 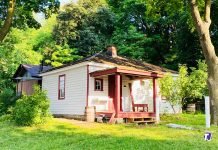 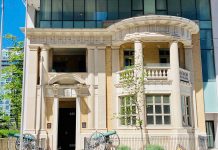