The Dufferin Park Racetrack was located on Dufferin St, where the Dufferin Mall stands today (on the west side, just south of Bloor St W), in the Brockton Village neighbourhood of Toronto.

The land was originally the territory of the Huron-Wendat and Petun First Nations, then the Seneca and lastly, the Mississaugas of the Credit First Nation. Later, the area was part of 25 acres of land that was owned by the Denison family. In the 1880’s, the Denison’s constructed a private horse-riding track and driving park.

In 1907, Abraham Orpen purchased the land and developed it into a public racetrack for thoroughbred and harness horse races. It was an irregular egg-shape and was only a ½ mile long. The popular attraction was often called “Little Saratoga” and was considered a track for ordinary people. While it did have a small reserved section, it did not have a clubhouse. Under the Grandstand, patrons could get a meal at the “Goodwill Restaurant”.

Articles in the local newspapers (dated 1908/09), mentioned that there was a campaign to stop the racing and betting at the Dufferin Park Racetrack under a Provincial charter that was no longer valid. Mr Orpen was able to keep the track going using a Federal charter.

The racetrack was not just home to horse racing but also hosted amusement events like wild west shows and circuses. The circus animals would travel by rail, disembarking from the depot near Bloor St W and Lansdowne Ave. The animals, which included elephants, then walked along Bloor St W to the racetrack.

The Track After Abe Orpen

Abe Orpen passed away in 1937 and his son Fred took over running the track. Dufferin Park Racetrack was closed in 1955 and demolished. Its stakes races were moved to Woodbine Racetrack on Rexdale Blvd in Etobicoke. That same year, the property, along with the Long Branch Racetrack were sold by the Orpen family for $4 million.

In 1956, the Dufferin Plaza opened and in the early 1970’s, the plaza was converted to a mall and enlarged. In the mall, there’s a display (near the southern entrance off of Dufferin St), detailing the land’s history as well as future plans for the site. They include developing what is mostly parking today by extending the Dufferin Mall further north. Called Dufferin Grove Village and spanning two blocks, there are plans for four residential buildings (some of which will be above the new portion of the mall) as well as a new park. Its scheduled for completion in 2026. 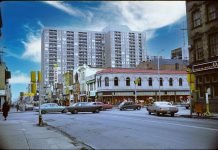 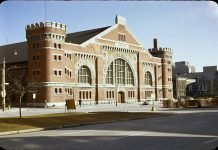