While the Midway is a big attraction at the CNE, the food may be bigger. Did you know during the 18 days of The Ex, over one million people visit the Food Building? It’s no wonder as there’s such a variety of delicious foods to choose from including comfort classics from Mac & Cheesery and Primo Spaghetti or perhaps something from one of Toronto’s local restaurants like San Francescos. There’s something for every taste along with many sweet treats at the Canadian National Exhibition.

The History of Classic Treats

Cotton Candy: Did you know this finely spun sugar delight was invented by a dentist in the late 1800’s?!

Funnel Cakes: This carnival treat is made by drizzling batter from a funnel into hot cooking oil. The result is a warm pastry that’s light and fluffy on the inside and crunchy on the outside. Dust it with icing sugar or add some soft ice cream and a bit of jam. Funnel cake was invented the same year the Canadian National Exhibition began, in 1879.

BeaverTails Pastry: This crunchy yet chewy, hot pastry was created by Pam and Grant Hooker of Ottawa in 1978. The hand-stretched Canadian classic has been served at the CNE since 1996. BeaverTails can be sprinkled with cinnamon and sugar or topped with delicious spreads like chocolate hazelnut, vanilla icing or cheesecake.

Candy Apples: This long-time favourite made it’s North American debut in Newark, NJ. It was 1908 and candy-maker William Kolb was trying out different recipes for a Christmas treat using red cinnamon. To sell the sweet yet spicy confection, Mr Kolb put a stick into apples then dipped the fruit in the candy coating. He sold them for 5¢ a piece. Soon, the treat that was invented over a century ago, was being served at candy shops, circuses, fairs and carnivals around North America and eventually, the world.

Caramel Apples: Canadian-born James Kraft and founder of JL Kraft & Brothers Co based in Chicago, first began making cheese in 1909. In 1933, Kraft introduced sweet, soft and chewy caramels to the world. So the story goes… in the 1950’s, Dan Walker who was a Kraft salesman, melted some caramels in a pot and dipped an apple in it. The caramel apple was born. Not only was this autumn treat a hit at carnivals and fairs, people were also making it at home using the recipe printed on the Kraft caramels bag.

Corn Dogs: Many people have claimed to invent the cornmeal batter-dipped hot dog on-a-stick. The patent for the corn dog cooking apparatus was applied for in the 1920’s however the savoury fair staple did not become wildly popular until the 1940’s. At the 2016 CNE, one of the most popular new foods that year was the re-imagined pickle corn dog!

The Food Building was designed by architect Richard Fisher and completed in 1954. The building, located at 10 Nova Scotia Ave, was the second in a series of structures that exemplified mid-century Modern style. At a cost of approximately $1.5 million, the simplistic elements of the white, pre-cast panel building include windowless walls with two rows of lamps on its main facade.

On the east and west sides of the Food Building are two bronze sculptures each featuring five leaping fish over a reflecting pool. Designed by Canadian artist Jean Horne, they’re one of a few of her works that are on public display as most are in private collections.

Until 1975, the Food Building had a 24 m or 80 ft stainless-steel pylon to the right of the south entrance. Called “The Needle”, the artwork was an interesting focal point however over time, the piece deteriorated and had to be dismantled. 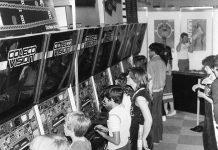 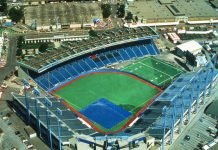