If there was one symbol or building that signified Toronto, or even Canada, the CN Tower would be it. Located at 290 Bremner Blvd, between Lake Shore Blvd W and Front St W in Toronto, the TV and radio communication tower can be seen from miles around. Even from the other side of Lake Ontario on a clear day.

Construction of What Was Once the Tallest Structure in the World

Building began by Canadian National (railway) on this engineering wonder in 1973. The tower was partially built for practicality. In the 1960s, Toronto was experiencing a skyscraper construction boom which caused some major communications issues. Signals from the existing radio and TV communications towers were bouncing off the tall buildings causing poor reception for locals.

In early 1973, workers removed 56 metric tonnes of earth and shale to start the foundation. The concrete shaft has a six-sided core with three support legs and within 8 months, it stood 335 m or 1,100 ft high. That portion of the tower was already the tallest structure in the City.

In the summer of 1974, work began on the 7-storey tower sphere. It would one day be the observation areas and revolving restaurant. In March 1975, the antenna was ready to be added. Olga, a huge Sikorsky helicopter, was flown in to both remove the massive construction crane then lift the 44 pieces of antenna into place. Just one month later, the tower was complete.

Completion of the CN Tower

The CN Tower took 40 months with more than 1,500 brave people working 24 hours a day and 5 days a week to complete. The architecture marvel opened to the public in June 1976.

For over 30 years, it was the tallest freestanding structure in the world at 533.33 m or 1,815 ft 5 inches. TV and FM radio reception were much better after that.

Did you know that the CN Tower gets struck by lightning approximately 75 times every year? To protect the tower, there are copper strips that run the full length of the structure along with huge grounding rods below it. When lightning strikes, electricity is transmitted through the copper wire and is then diffused into the ground by way of the rods.

Engineers have designed the CN Tower so that it could weather the incredible force of winds which can come from all directions and at different intensities.

The legs of the triangular-based tower tapper as they rise towards the Observation pod. Depending on the direction of the wind, the shape allows the wind to either split and deflect or reduces its force.

Tightened steel cables run inside the full length of the legs of the concrete structure. These cables allow the tower to be strong yet flexible. During high winds, the Observation Deck can sway up to 22.9 cm or 9 inches while the Sky Pod can sway nearly 50 cm or 19.6 inches. In the antenna, there are two weighted rings. These heavyweights counteract the sway by resisting the push of the wind from various directions.

The #1 Attraction in Toronto

Today, over 1.5 million people from around the globe visit our incredible attraction that defines the City’s skyline. Along with the observation decks, the CN Tower is home to the EdgeWalk, Glass Floor, SkyPod, LookOut, high-speed elevators, the 360 Restaurant, shopping and much more.

Bank of Montreal – Architectural Work of Art, now the Hockey Hall of Fame

Santa Claus Parade – A Toronto Tradition for Over 115 Years 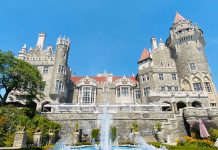