Home Places Parks, Gardens & Beaches Allan Gardens – Step Back in Time to a Garden Oasis in...

Allan Gardens is located at 160 Gerrard St E and is bordered by Sherbourne, Carlton and Jarvis Sts in the Garden District neighbourhood of Toronto.

The Allan Family’s Passion for Horticulture

In 1834, Sir John Colborne founded the Toronto Horticultural Society. It was the first in Ontario and was established to introduce and cultivate better varieties of plants, fruits and vegetables. Th Honourable George William Allan a noted philanthropist, politician and land developer, donated 5 acres of land from his Moss Park Estate to the Society. In 1860, the Prince of Wales (later King Edward VII) was on hand to open the Horticultural Gardens. The Society leased more land from the government in 1864 and in 1888, the park was given (deeded) to the City. In 1901, the park and conservatory was named Allan Gardens.

The iconic Palm House and complex are the focal point of the park but prior to that, there was building called the Pavilion from 1878 to 1902. It and many splendid plants were destroyed by a fire. There was also an ornate fountain coming up the main walk which survived the fire.

In 1910, the Palm House was opened. Designed by Robert McCallum, the Victorian-style conservatory is made from glass, steel, brick and wood and features a 16-sided dome. Over the years, greenhouses were added including:

The Palm House was listed on the City’s inaugural Inventory of Heritage Properties in 1973. It was amended in 2013 to include the property. Today, the indoor botanical conservatory features over 16,000 square feet of colourful flowers and plants in 6 greenhouses. The park features display gardens, a playground, teaching gardens, the historical horticultural gardens, a monument to Robbie Burns and an off-leash dog area. 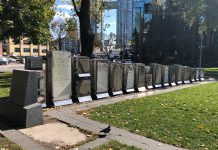 Leuty Lifeguard Station – Watching Over Beach-Goers for a Century